Naragex Forest is a dense grove tucked into Route 301 and is the only path between Zarivar Town and Superior City. The forest was once protected by the Legendary Pokémon Celebi, but now all that remains is its shrine. There are no trainers looking to challenge travelers.

The path through Naragex Forest begins in the northwest corner. From there the path heads east through some grass, with a house to the north. Inside the house is a Poké Ball in front of the sink. The Gentleman at the table is also willing to battle trainers if they tell him they believe themselves to be powerful trainers. If defeated, he will give the player a Great Ball.

Back outside the house, the path continues east and turns a corner south and backtracks to the west. On the northern side of the path are two berry trees with two Oran Berries and two Pecha Berries. The patches of soil underneath can be used to plant or replant berries.

Continuing west is a fork in the road. To the west/north is a Hypno that is key to progressing through Superior City. The Hypno cannot be battled or captured. To the north of the Hypno is a shrine to Celebi as well as a man who will teach Pokémon Headbutt. There is no limit to how many Pokémon he will teach.

Continuing south and east past the fork toward the shrine will lead to the other side of Route 301 into Superior City. 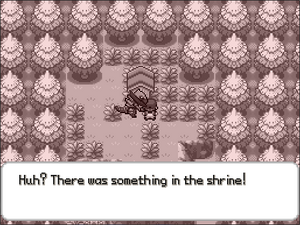 A special encounter with Celebi will occur if the player interacts with the shrine after using Tesseract. Celebi is at level 100 when encountered. Be careful when attempting to capture it as it knows Perish Song.

Retrieved from "https://pokemonzetaomicron.fandom.com/wiki/Naragex_Forest?oldid=23567"
Community content is available under CC-BY-SA unless otherwise noted.